The 28-year-old former refugee has become a viral sensation since taking on the role – and has won over his critics. ‘I’ve had a lot of stick, but I don’t care - I decided to be myself,’

A little while back we heard about a very cool guy over in Sheffield, so we thought we'd introduce you to him. Meet Magid Magid, Sheffield's youngest ever Lord Mayor.

Magid Magid was in his local Sainsbury’s recently when a shopper asked him to pose for a picture by squatting.

The 28-year-old cheerfully obliged, crouching on the supermarket floor “with a loaf of bread in my hand”. Today, our photoshoot takes for ever, because as soon as we leave the town hall he keeps being stopped in the street. But his fame extends far beyond his home town of Sheffield. A Jordanian friend told him his mum had seen him on the news in Amman. “I’m like: ‘What the heck?’ I didn’t expect this much attention,” he says.

Magid has become a global celebrity since being elected lord mayor of Sheffield in May. His elevation was reported as good news all over the planet and when we meet in his office – the lord mayor’s parlour, to be precise – he can’t stop smiling. But, in fact, his appointment was not celebrated with universally excited fandom at first.

“You’re a disgrace to this city,” people shouted at him from passing cars. “I am disappointed that Magid has seen fit to tell everyone that he is a black, Muslim immigrant,” complained a letter to the local press. Another resident wrote of his appointment: “It’s an insult to the people of Sheffield ... There must be many Sheffield-born people who are worthy of being the mayor. What has Sheffield finally come to?” There were complaints about his choice of music for his inauguration ceremony – the Imperial March from Star Wars – and Magid pulls out a copy of a local paper from his desk drawer to show me “the most ridiculous” letter, which lamented: “We are losing our identity.”

How did he feel about the criticism? “Do you know what, it was a small minority. But it felt large, because it was all I was hearing.” Did it make him wobbly? “Yes,” he admits. “Yes, of course. I’m human.”

Making his own rule: day in the life of Sheffield's youngest ever lord mayor - video

What changed everything was a single photoshoot... Every lord mayor’s appointment since the 19th century has been commemorated by an official portrait. “So I said to myself: that picture’s going to outlive me well past when I’m dead. I wanted a picture that encapsulated me, because I always think a picture should tell. Because look at all of them” – he gestures around the parlour to solemn faces lining the flock-wallpapered walls. “It’s just a boring headshot. It would have been so good if every lord mayor had the opportunity to be creative with their picture, to tell their story.” Wearing his official gold livery collar and black Dr Martens boots, he posed by squatting on the marble bannister plinth of the town hall stairs. “I shouldn’t have done that, because it’s health and safety, but nobody was looking,” he grins. In other pictures, he wore a bright-yellow baseball cap turned back to front, his chains over a jumper.

“Then people were like: ‘You’re disrespecting the town hall, disrespecting our traditions.’ That’s all I was hearing.” But when the images were posted on social media, they went viral. Messages from all over the world began “blowing up my inbox. And then I’m like: wow. I’m doing the right thing.” He beams. “And the only reason we’re here today – the only reason we got so much attention – is because I decided to be myself; because – I know it sounds a bit cliche – I did things my way and [did] what I believe in. Had I stuck to the norms, the traditions, I don’t think you’d be here today from the Guardian. So now, do you know what, I wake up in the morning and I think: ‘I couldn’t give a fuck today, I couldn’t give a shit,’ I’m just going to do what I want to do. Of course, I’ve had a lot of stick. But I don’t care.”

Magid didn’t even tell his mother or his sister he was going to become lord mayor until his appointment was announced. The ceremonial position lasts for one year and rotates between the parties represented on the council; of his 121 predecessors, the youngest had been 40 and none had been a Green. His party colleagues nominated him because, as one said: “I’ve never met anyone who doesn’t like him.” This is easy to believe, for he could not be more charming. 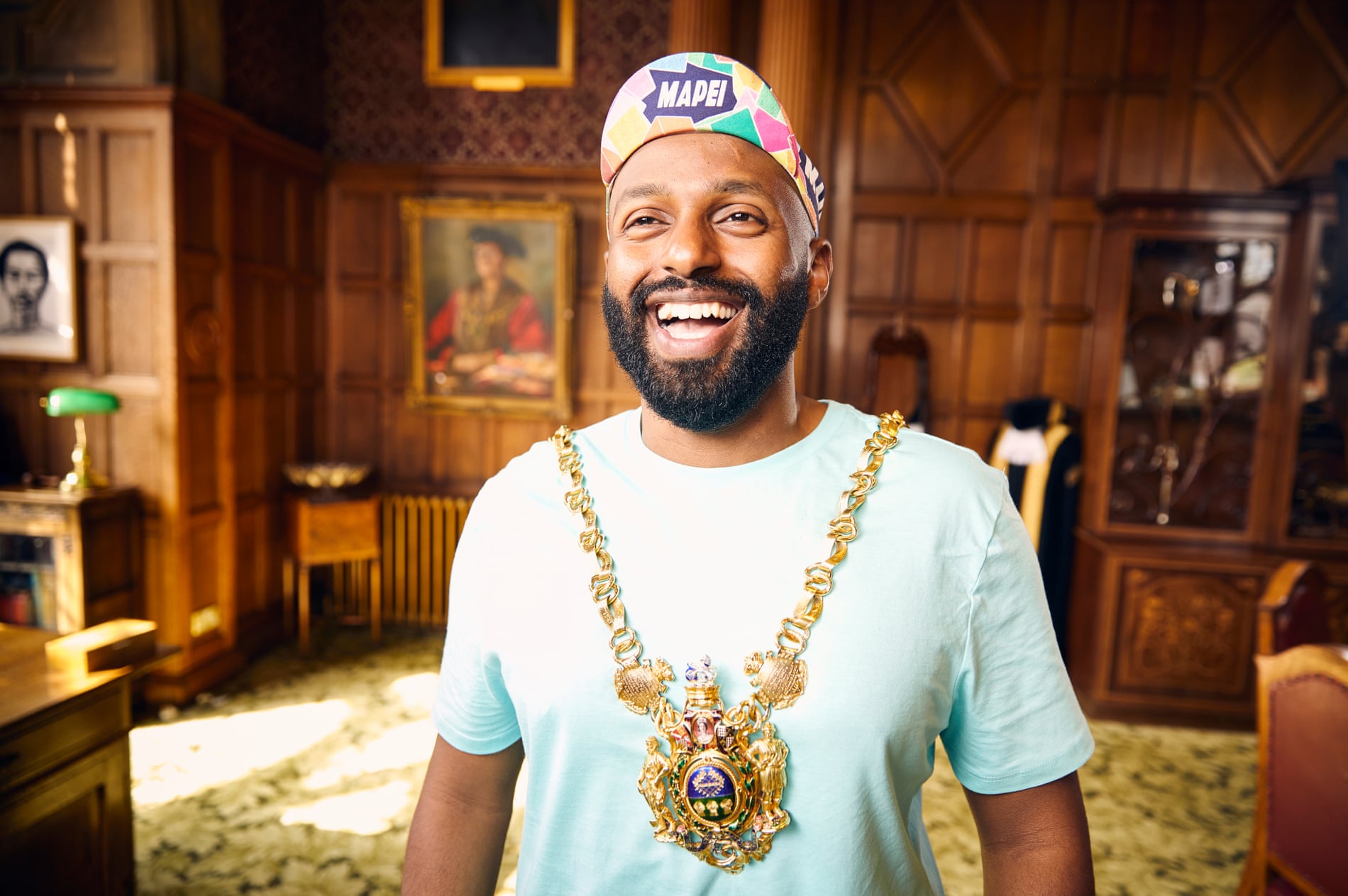 "You could be the most racist person to me; I will still open that door for you.
You can’t solve hate with hate"

Magid was five when he fled Somalia with his mother and elder sister.
They spent six months in Ethiopia before arriving in Sheffield, where life wasn’t easy. His mother supported the family by working as a cleaner, but she struggled to learn English and Magid grew accustomed to seeing her being racially abused in the street. His teenage years were troubled and for a while he was a gang member. I ask him to be specific about his adolescent misdemeanours, but he grows uncharacteristically coy. “It was just a case of being mischievous.” Was he ever arrested? “Have I ever been arrested?” he repeats slowly. “I think I might take a pass on that question.”

He was rescued by, of all things, a love of travel brochures. After raising money to climb Kilimanjaro, he studied aquatic zoology at the University of Hull, where he founded a mixed martial arts club and was elected to the students’ union’s sports executive. He had never voted when he stood for president of the union; he didn’t even know what a picket line was. “I think the only reason I got elected, with a big majority, was because I think people could just relate.” After graduating, he became a digital marketing consultant and stood successfully as a Green party council candidate in 2016, “because the people on the council just didn’t reflect its electorate”.

Unlike most elected politicians, Magid lives in a shared house with three people he had not met before moving in. His day begins not with the Today programme, but with YouTube – “I’ve got a big TV in my bedroom, so I just stick that on” – and he is still trying to get used to the chauffeur who pulls up outside his house in a Jaguar to take him to work; he won’t let him open the car door. “It’s like protocol, apparently,” he marvels, laughing. “But it’s a bit ridiculous.”

In one sense, he identifies with the new generation of political outsiders who have been winning office all over the world. “It’s a symptom that our democracy is not working properly.” He corrects himself: “No, it’s not working at all. It’s definitely not reflective, not just of people of colour, disabled people, of women, but of any of us, really. We’ve got a cabinet of millionaires in this country, probably 90% of them went to private school [the figure is actually 35%], and they make decisions for the rest of the country.” However, despite having starred in reality TV earlier this year – on the third series of Channel 4’s fugitive show Hunted – he takes great exception to any suggestion of parallels with Donald Trump.

“That doesn’t sit with me very well, it really doesn’t." He is part of the establishment. He got given $1m [as a loan by his father] when he was a kid. He doesn’t represent the people. It’s just a complete con.” When Trump visits the UK in July, “I’ll definitely be protesting. Definitely.”

But if Trump is a great disruptor, Magid’s plans for Sheffield come under the same category. Every month, he will invite a member of the city’s creative community to showcase their talents at the council meeting. “Call if a half-time show, call it what you want.” The first, in June, was a scientist called Hassun El Zafar, who performed magic tricks. “There was a water rocket launched across the chamber and he talked about how science is a creative art in itself. It was amazing.” Magid wore a black T-shirt to the meeting, bearing the slogan “Immigrants Make Britain Great”, and a tartan beret. What did the councillors make of it all? “They were a bit hesitant and whatnot at first – but then they came around to it and they were laughing and then they all loved it.”

He also invited the letter-writers who condemned his appointment in the local press to a round-table meeting, because “I believe we should be having uncomfortable conversations, rather than sweeping things under the carpet”. The man who had complained that the city’s people were “losing their identity” didn’t show up. “But others did and they came around to it at the end of the day.” Really? “Yes, genuinely, they did.”

Magid strikes me as unusually untroubled by self-doubt. He agrees. He is well aware of some hostility on the council towards him and his ideas, but he says it is concentrated in one party, which he won’t name. His plan is to “kill it with kindness and bury it with a smile. You could be the most racist person to me; I will still open that door for you. You can’t solve hate with hate. That doesn’t solve anything whatsoever. I will still be kind to you, because at the end of the day you’re human; we all go through the same problems, same issues, face the same things, and I believe people can come around just by meeting people. I treat people with kindness, because arguing doesn’t solve anything.” He knows there are people who are waiting for him to mess up – “100%, massively” – and he is sure he will, sooner or later. “I’m not perfect. I’m going to make mistakes.” (He is keen to correct reports, however, that he plans to “pimp” the lord mayor’s parlour at public expense: “There’s no way on earth I’m going to spend public money on refurbishments.”) But nothing can detract from the symbolism of his appointment.

“It’s really easy for everybody to feel: ‘Oh, isn’t it amazing,’ but in reality my story is very unlikely, because of this government’s policies.” Were he five years old today, he points out, this government would not have allowed him and his family entry to the UK. He watched the plight of the refugee boat turned away by Italy recently with horror. “I feel disgusted, because had they been white Europeans I doubt very much they would have been sent away. If that had been white Europeans it would have been a different story.”

I ask him about his political ambitions and he laughs. “Nobody joins the Greens to have a career in politics.” What about reality TV – does he have any plans to do more of that? He is single, but he looks appalled when I suggest Love Island; laughing again, he shakes his head.

“No. And I don’t regret going on Hunted, but I would never do anything like that again. I hadn’t realised it would all be contrived; it wasn’t really real at all.” He pauses for a moment. “There is one show that seems genuine, though. And I love dancing. So, yeah, I wouldn’t do anything else – but I’d do Strictly.”

Get Set for a whole new look and a bigger experience. Slenky is upgrading to the next phase. New Slenky is everything you already love, but bigger, better and bolder.